Intro and Pics for the Most Interesting Lizards 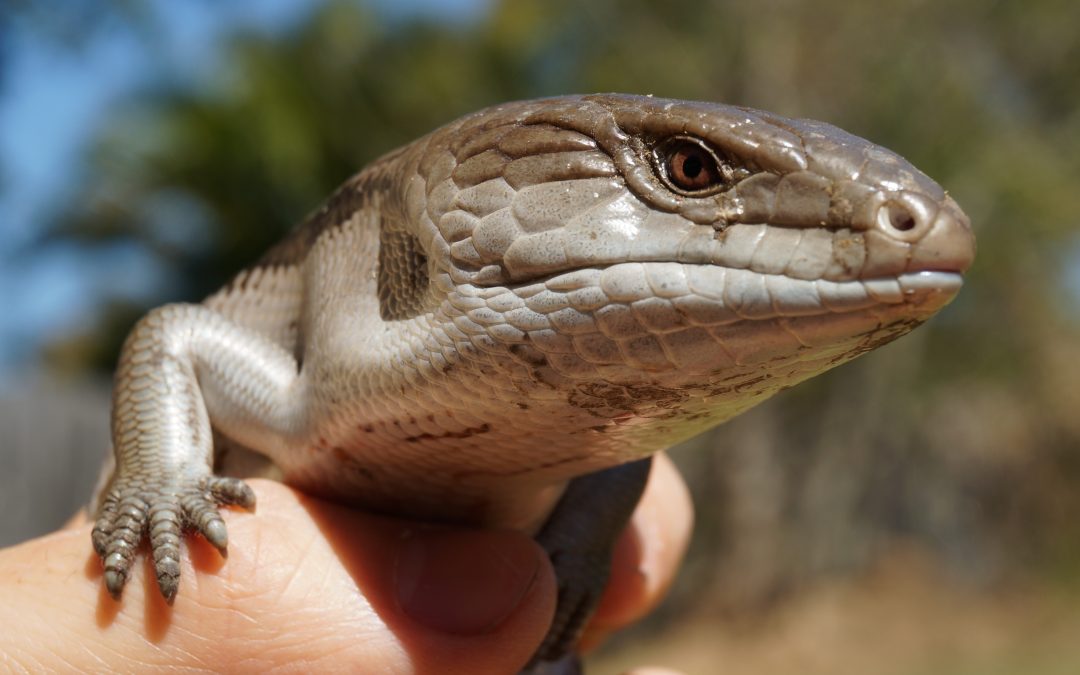 Lizards are the most common reptiles found on the planet today. As reptiles, they are related to snakes, crocodilians, turtles and tatuaras (only found in New Zealand). In addition to (usually) having legs, lizards are differentiated from snakes by having ear holes, eyelids that can open and close, and less flexible jaws.

Lizards are generally egg layers, but one group, the horned lizards give birth to live babies. Lizards are cold-blooded and hibernate during winter months. Lizards are incredibly susceptible to stress from a variety of factors. Species of lizards native to small islands are especially at risk of extinction. 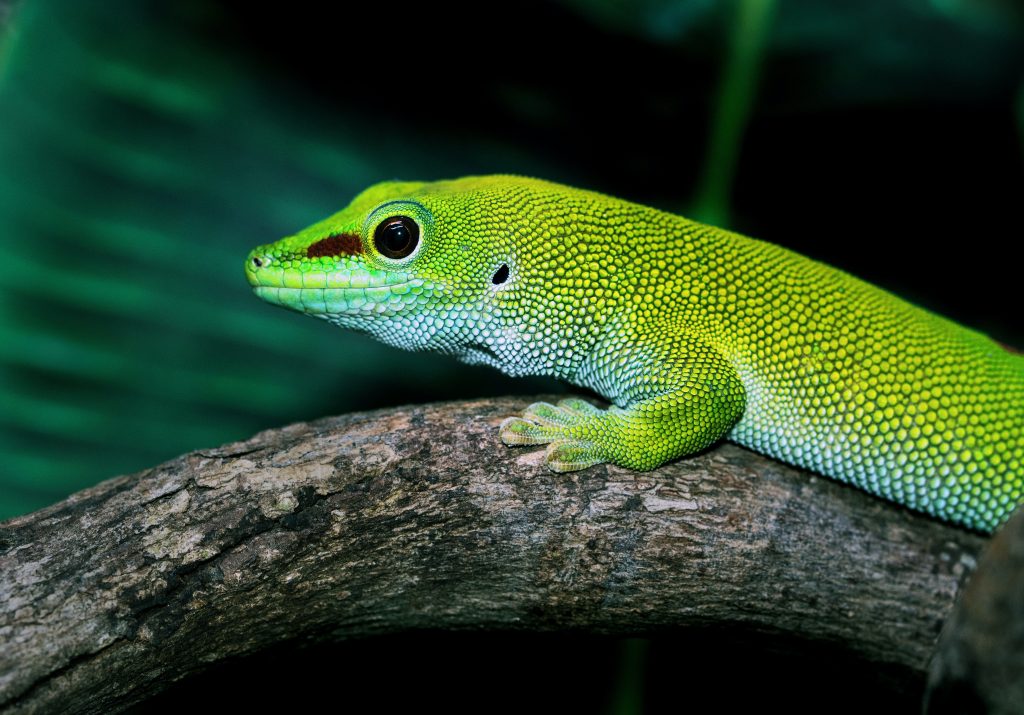 Geckos may be best known for their climbing ability and have small hair-like fibers on their feet that let them stick to almost any surface, including glass. Geckos have great hearing, and unlike many other lizards can make vocalizations by chirping. If detached, Geckos can regrow their tails and are known as good luck charms in many parts of the World.

Geckos make up about 1/6th of all reptile species and come in a wide variety of patterns and colors. Geckos can live as long as 15 years in nature, but not as long as pets.

Geckos have many unusual characteristics: 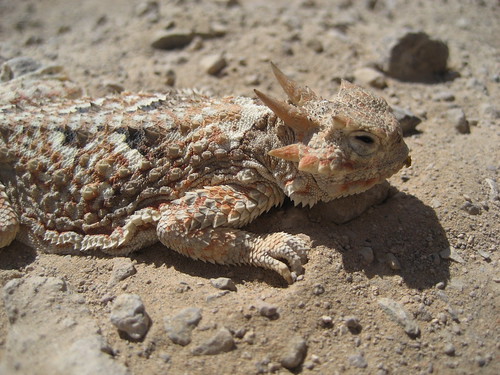 Horned lizards, also called horny/horney toads or horned toads, are closely related to iguanas and chameleons, but look much different, having sharp spines on their heads and backs which they use as protection. While most lizards lay eggs, horned lizards are rare in that they give birth to live young. Horned lizards are unique to the western portions of the United States and Mexico. Horned Lizards hard to keep because they only eat a very limited species of ants, eating a few hundred ants a day. Their numbers continue to decline throughout the southwest despite laws passed to protect them.

The horned lizard has several important adaptations that allow them to survive in this difficult environment. They have scales on their skin which allow them to lose heat faster than most other reptiles. This adaptation is especially important because the sun heats up the ground which creates a hot and dry environment. Their tail also has a frill on it, and they can use it as a type of “fan” to cool themselves 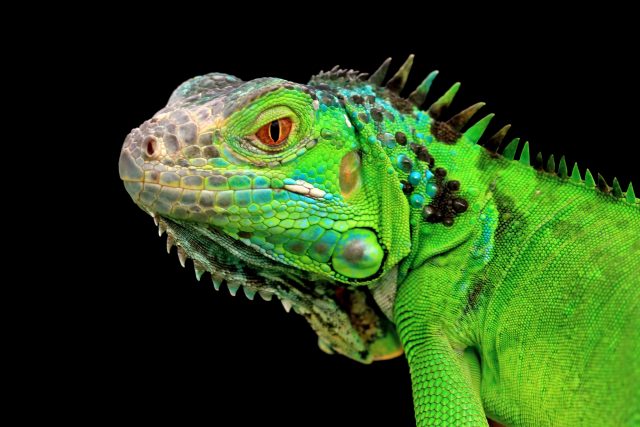 Closeup of a Green Iguana

Iguanas are a large family of lizards with more than 700 species and can be found throughout most of the temperate or tropical regions of the Americas. Iguanas are possibly the most popular reptiles purchased from pet stores today. Unfortunately, they are also the most abandoned reptiles, often being dumped in the Wild. As herbivores, they and should only be fed a variety of fruits and vegetables. 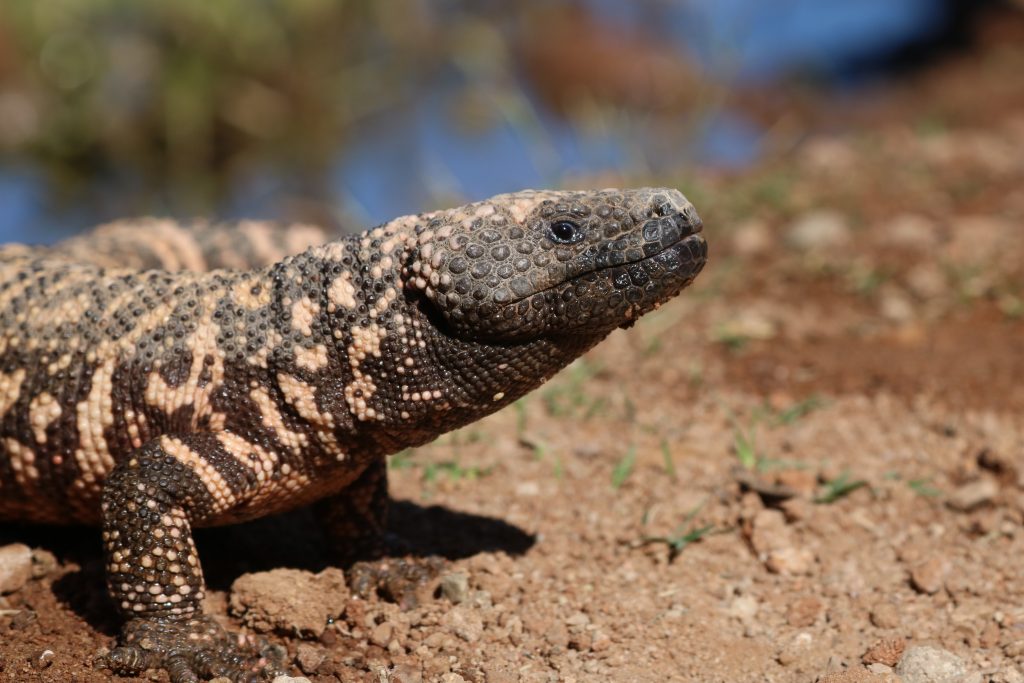 The gila monster is one of the few venomous lizards.

Gila monsters are one of only two venomous lizards in the world, the other being the closely related beaded lizards. Gila monsters lay eggs, also known as oviparous. They are a protected species under Arizona state law in the United States, and may not be killed, or kept in captivity without a license in AZ. Gila monsters are solitary creatures who are inactive most of the time.

Gila Monsters are from 18 to 24 inches long and weigh about 2 lbs., with big heads and powerful jaws. When they bite, thye are famous for their tendency to “hang on like a bulldog”. They have beaded skin of orange or pink and black beads. Gila monsters are known to live for more than 20 years in the wild, and are desert dwellers, living near washes (dry river beds) of the South West US and Mexico. They spend as much as 98% of their life underground in burrows. Because they are venomous, Gila monsters have been villanized and persecuted . 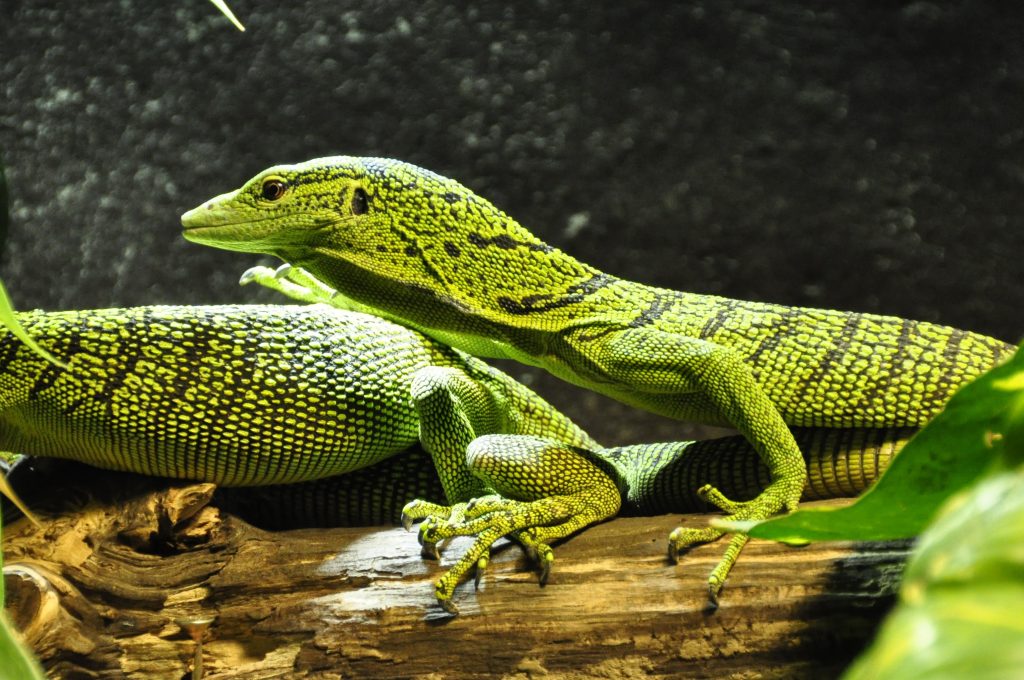 Monitor lizards are the family Varanidae, which includes the largest living lizard, the Komodo Dragon. Monitor lizards possess a high metabolic rate for reptiles and several sensory adaptations that benefit the hunting of live prey. Monitor Lizards hunt during the day. Legend has it that monitor lizards give their particular magical virtues to their owner. 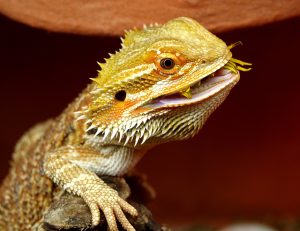 The Bearded dragons are a popular reptile and a good lizard for children and adults. They tend to be gentle and get quite accustomed to being handled. They like variety when they eat as they are considered an omnivore. A dragon will eat, insects, flowers, fruit, vegetables, small creatures and such. They come from the desert habitat. 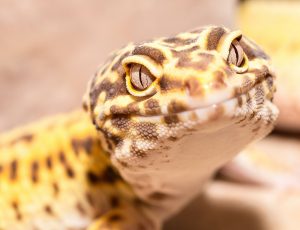 This is one of the most widely kept of the reptile lizard family. They like to sleep during the day because they come from a desert habitat where it is quite hot in the daylight. This type of lizard requires mainly insects so you would have to feed them things from like crickets or which you can buy from a mail or purchase at a bait store or pet shop etc. But they will eat other insects too and wax worms.

Ok, so we covered some basics on the food for the gecko and dragon but there are still more considerations when it comes to the food you must give to your lizard. Most food you give your lizards will not have enough nutrients for a balanced diet. So you will have to give your pet vitamins mixed in the food.

For the gecko since it eats bugs you will have to learn how to feed the bugs with very nutritious food about 48 hours prior to feeding the insect to the lizard. Many insects purchased from a shop have not been fed enough nutritious food to pass on to the waiting lizard. If you don’t feed the nutritious food to the insects first then your lizard will likely have poor health after about a month.

For the Bearded Dragon you should sprinkle the food with a suitable vitamin powder to help complete its meal. 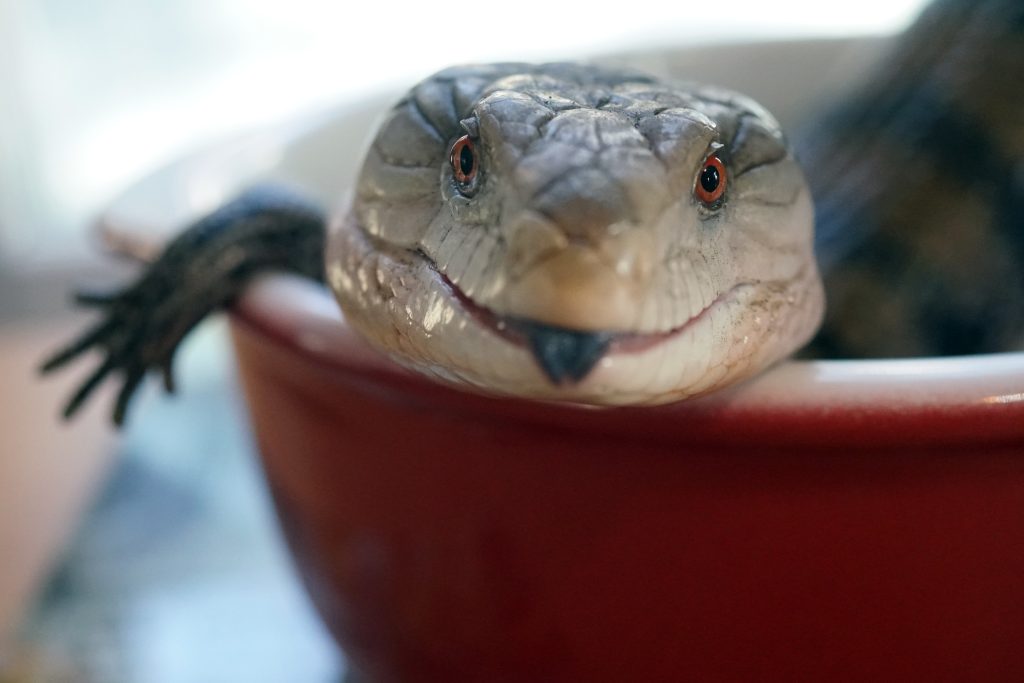 Pic of a blue tongued skink.

Blue tongued skink pets are popular because they are relatively easy to care for. They are also relatively inexpensive and do not require a lot of space. Blue-tongued skinks can live up to 20 years or more with proper care. They are omnivores and will eat almost anything that is offered to them. A blue-tongued skink’s diet should consist of vegetables, fruits, insects, and small animals like mice.

They can be found in many different colors, including yellow, orange, red, brown, green and blue. The most common color is brown.

Blue-tongued skinks are very social creatures and enjoy being around people. They will often try to climb onto your shoulder or head if you let them crawl on you. hey also enjoy eating insects which makes them a great pet for people who want to keep their yard free of pests. They do not need any special equipment or cages because they can live in an aquarium or terrarium with a screen top which allows them to climb out when they want to explore their surroundings. 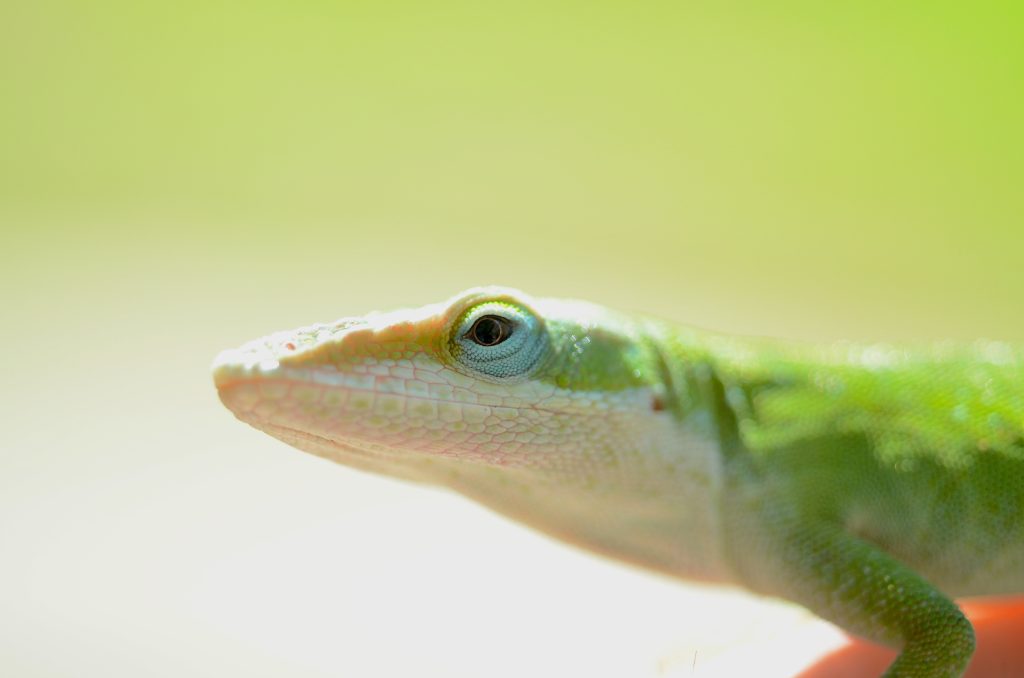 Green anoles are small, non-threatening lizards that are popular pets for their calm demeanor. They can be found in the wild in Florida, Louisiana, Texas, and the Virgin Islands.

They are small lizards that can be found in the wild in Florida, Louisiana, Texas and the Virgin Islands. They have a calm demeanor that makes them popular pets for people with no experience handling reptiles.

– Green Anoles are small and easy to handle because their claws do not secrete venom like those of other lizards.

– The green anole is harmless and docile, making it an excellent pet for people who do not want to deal with the hassle of handling a more active type of lizard.